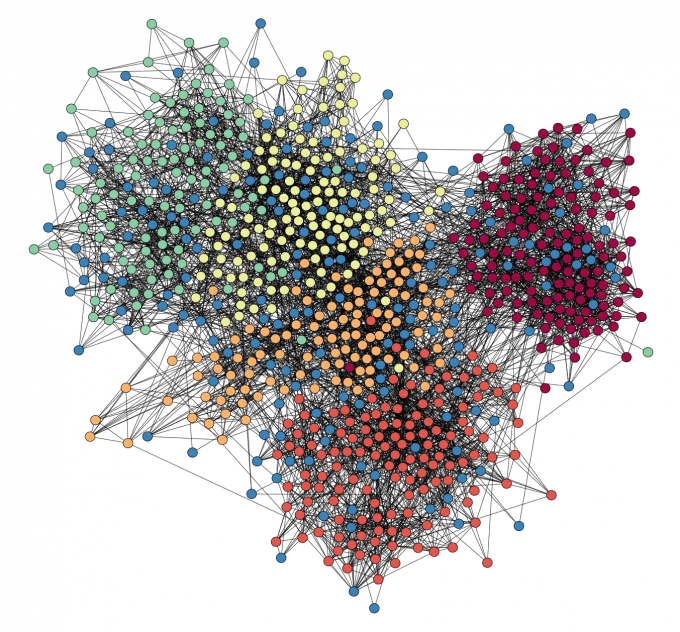 By Christian Sarkar and Philip Kotler

The history of humankind’s evolution is one of collaboration and connectedness.  Without language we would never have built cities.  Without culture, we would have no nations. Unlike machines, humans need other humans to survive.

In the digital era we see a parallel in terms of business ecosystems.  Markets are social constructs, and are built around a primary value-proposition: building trustful relationships between customers and creators (or producers) to enable hassle-free transactions. 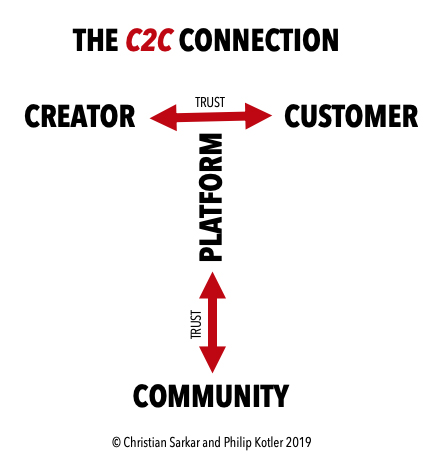 The connection is between the Creator and the Customer.  The musician and the fan.  The chef and the public.  It’s that human connection we still yearn for today.  We want to connect to Picasso, not the museum curator.

Underlying this connection is the Community connection – the community of customers and creators, the local community impacted by the business, and society itself.

The Choice: Surveillance or Collaboration?

Unfortunately, this is not how things how have played out.

According to Zuboff, surveillance capitalism was pioneered at Google and Facebook, in much the same way that mass-production and managerial capitalism were pioneered at Ford and General Motors a century earlier, and has now become the dominant form of information capitalism.

The excuse that companies have used for this unprecedented surveillance is “customer centricity.”

We need your data in order to serve you better.

In China, the state has taken this a step further.  In this article in The Atlantic, Anna Mitchell and Larry Diamond describe the Chinese vision of surveillance:

Imagine a society in which you are rated by the government on your trustworthiness. Your “citizen score” follows you wherever you go. A high score allows you access to faster internet service or a fast-tracked visa to Europe. If you make political posts online without a permit, or question or contradict the government’s official narrative on current events, however, your score decreases. To calculate the score, private companies working with your government constantly trawl through vast amounts of your social media and online shopping data.

Why is this an issue for us?  The authors explain:

China’s experiments with digital surveillance pose a grave new threat to freedom of expression on the internet and other human rights in China. Increasingly, citizens will refrain from any kind of independent or critical expression for fear that their data will be read or their movements recorded—and penalized—by the government. And that is exactly the point of the program. Moreover, what emerges in China will not stay in China. Its repressive technologies have a pattern of diffusing to other authoritarian regimes around the world. For this reason—not to mention concern for the hundreds of millions of people in China whose meager freedom will be further diminished—democracies around the world must monitor and denounce this sinister creep toward an Orwellian world.

It can’t happen here, you say.  Well, in the US, we’ve all just learned that the Federal Bureau of Investigation (FBI) and Immigration and Customs Enforcement (ICE) are exploiting state DMV records for facial recognition data without the knowledge or permission of drivers.

Is surveillance capitalism our future?

Or is there another form of capitalism – let’s call it collaborative capitalism – based on consent and collaboration, which is the opposite of surveillance (state or private)? 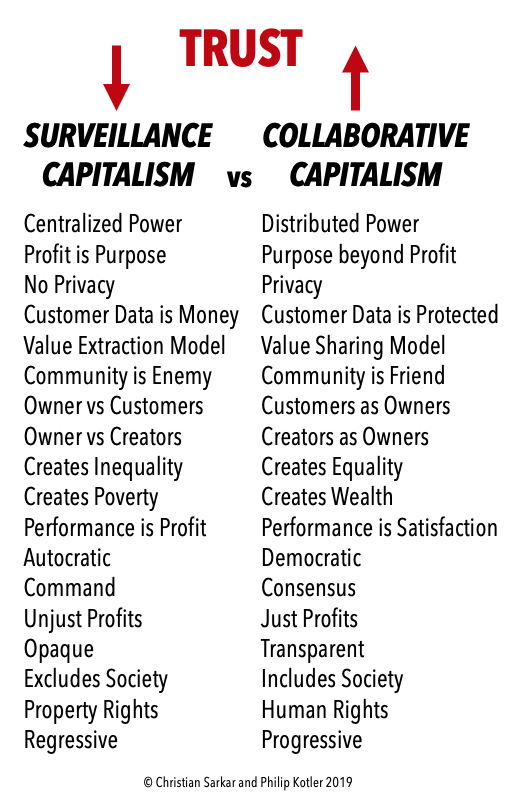 The Evolution of Customer Engagement

If we examine the history (brief as it is) of the customer engagement journey, we see a pattern: a shift from company-centric to customer-centric power.  We are now standing at the proverbial fork in the road.  On one side, collaborative capitalism.  On the other, surveillance capitalism.  The choice is ours, but only if we fight for it.  Let’s look at the journey to date. 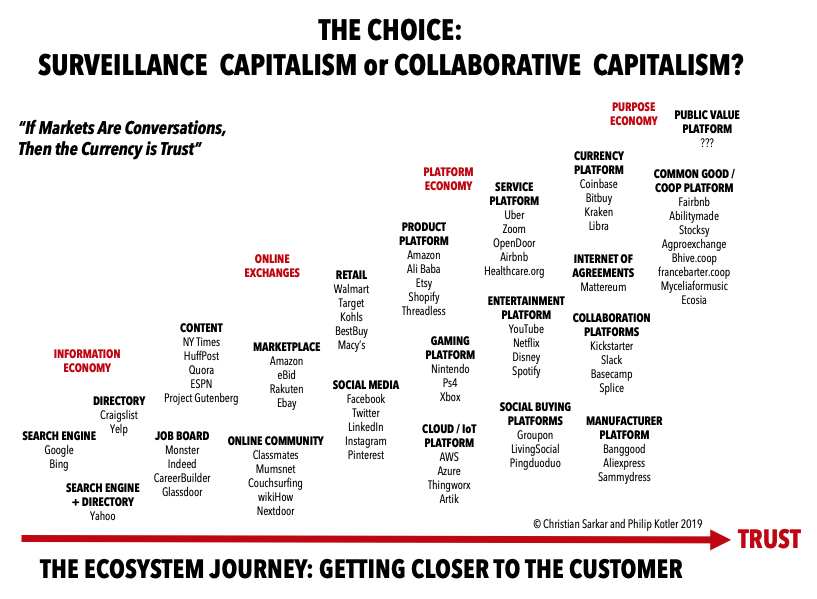 The Information Economy is how we viewed the beginning of the commercial Internet.  Companies raced to get on the “information superhighway.”  AltaVista, Yahoo!, and then Google changed our lives forever.

Craigslist, the online listing service, replaced printed classifieds, but it was also the conceptual launchpad for many of our current service platforms (as Andrew Chen points out in this essay): 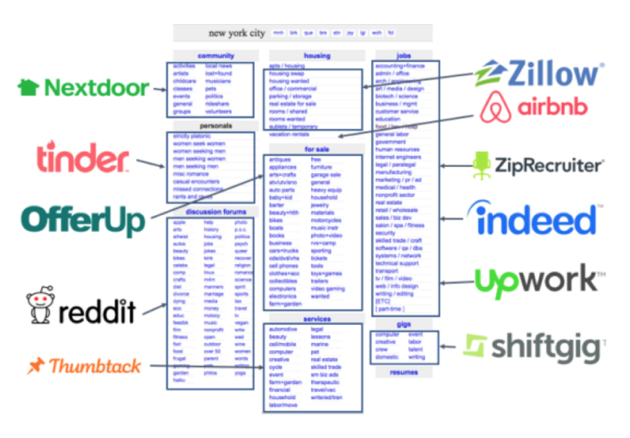 Amazon went from selling books to becoming a product platform and an IT infrastructure service provider, continuously adding new innovations and customer value to its strategy whiteboard, while keeping teams small and responsive using Bezos’ infamous “two pizza rule.”  Heck, Amazon is even helping the Pentagon with its AI challenges.

Traditional wisdom says that business ecosystems are designed to transform a company’s value chain into a value network of multiple partners.  But we know that in the battle between platforms and products, the platform usually wins – see here and here.

Currently we seem to be living in the platform age, where customers and producers meet on a specialized platform to provide friction-free (hopefully) experiences. Gaming platforms, trading platforms entertainment platforms, service platforms, you name it.  That’s the platform economy businesses are struggling to master.  If your competitor builds the platform of choice for your industry, what’s left for you?  Not much.  In a winner-take-all culture, we end up with the four horsemen – with a few players controlling vast empires that are not exactly doing what’s best for the customer.

The power of pull – as described by John Hagel and JSB reigns: the only sustainable edge in the future will come from accelerated capability building — creating the conditions to enable people to learn faster by working together.

What’s Next? Purpose as a Platform

If markets are conversations, then the currency is trust.

What happens when your customers lose trust in your product, your platform?  Will Facebook be able to bring its own currency to the world?

The problem is trust, notes Professor Scott Galloway: “Facebook hasn’t shown an ability to think through unintended consequences or prevent bad actors from weaponizing its platform.”

In the world of ecosystems, ask yourself: what inspires participants?   What engages followers? Fans?

Groups like the Platform Cooperativism Consortium are creating a space for collaborative capitalism.

They are justifiably upset with “platform capitalism” because they view the Internet slipping out of ordinary users’ control. Their point-of-view:

The power held by principal platform owners like Uber, Amazon, and Facebook has allowed them to reorganize life and work to their benefit and that of their shareholders. “Free” services often come at the cost of our valuable personal information, with little recourse for users who value their privacy.

The paid work that people execute on digital platforms like Uber or Freelancer allows owners to challenge hard-won gains by 20th-century labor struggles: workers are reclassified as “independent contractors” and thus denied rights such as minimum wage protections, unemployment benefits, and collective bargaining. Platform executives argue that they are merely technology (not labor) companies; that they are intermediaries who have no responsibility for the workers who use their sites. The plush pockets of venture capitalists behind “sharing economy” apps allow them to lobby governments around the world to make room for their “innovative” practices, despite well-substantiated adverse long-term effects on workers, users, the environment and communities. At the same time, in the gaps and hollows of the digital economy, a new model follows a significantly different ethical and financial logic.

Their goal is to foster platform cooperativism – a growing international movement that builds a fairer future of work, rooted in democratic ownership. Bottom line?  The Internet can be owned and governed differently.

Is it any wonder that we are beginning to see a new wave of startups and businesses striving to do good, to create a platform around purpose?  For example:

All of these companies are build developing ecosystems and platforms built around connecting customers with the job to be done, for less, or for free.  They are seeking to build a more equitable, common platform for value exchanges.

What this brings us to is the idea that we will soon see non-profit and public exchanges that enable value-exchanges between customers and creators that will build on community and local participation and more democratic and inclusive forms of governance and ownership.

What if there was a non-profit version of Facebook?  What if your local post-office was a public platform for banking?

“Move fast and break things” may be a catchy phrase, but democracy is a fragile social construct. Stay tuned.  Big disruptions are coming.

UPDATE: See the discussion by Simone Cicero, Stina Heikkilä, and The Platform Design Toolkit at their June 2019 gathering in Barcelona:  Can public institutions be platforms?

Christian Sarkar is the editor of The Marketing Journal, an entrepreneur, marketing consultant, and activist. He is the founder of  Ecosystematic, an ecosystem visualization tool. See also the $300 House project and FixCapitalism.com. He is the co-author (with Philip Kotler) of Brand Activism: From Purpose to Action  (2018).

Published simultaneously at The Marketing Journal.